Western-Dyer Productions have a proven track record over 10 years of successful touring throughout regional and rural Queensland and Western Australia. With a thorough understanding of what communities want and need, the company has consistently produced and toured popular shows including ‘Barbara and Barry’s Sweet, Sour and Saucy’, ‘The Roaring Twenties’, ‘Oh Lady Be Good’, ‘Lissa and Nee Nee Space Adventure’ and ‘Lissa and Nee Nee Adventure Time’.

The team have travelled locally and globally to key festivals (Edinburgh Fringe, Woodford Folk Festival, Adelaide Fringe, Queensland Music Festival, Brisbane Festival) and have toured twice with the UK NRTS (Ella, Marilyn Marlene and Me, Lush Life, Oh Lady Be Good). They are known and respected for their refined skills, spontaneity and authenticity.

A group of regular women hit the “middle age”. They are in the driver’s seat: carers for their children and their parents, holding down careers, propping up friends, they’re old enough to take the piss out of themselves one second and in the next be completely tender, wise, strong, angry, sexy or just down right bedraggled. They seek refuge in each other … and the Dirty Fame Flash Candles Club.

Drawing on all the best movies of an 80s youth (Dirty Dancing, Fame, Flashdance, Strictly Ballroom, 16 Candles, Pretty in Pink, the Breakfast Club, Girls Just Want to Have Fun) this original play is fast paced, funny and excruciatingly familiar for anyone else in the ‘midlife’. Featuring Melissa Western, Helen Cassidy and Neridah Waters the dialogue will reward audiences who register all the famous phrases. “I carried a watermelon?” says everyone.

But the fun doesn’t stop there. Into the second half of the night explodes an interactive 80s dance extravaganza led by pocket rocket dance queen extraordinaire Neridah Waters (Common People Dance Project). The audience are invited to come dressed in their best 80s tizz and enjoy drinks like Midori and West Coast Coolers and, if you’re really fancy, a Pina Colada.

By turns sassy, soulful, smart and sweet, she straddles the worlds of jazz, cabaret, pop and theatre bringing her rich, velvety tones and incredible versatility to live music, theatre and event entertainment. 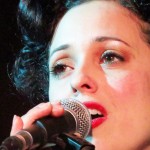