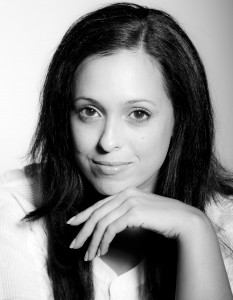 By turns sassy, soulful, smart and sweet, Melissa straddles the worlds of jazz, cabaret and theatre. She performs internationally, performing and producing new stage works and singing with a variety of ensembles. Her passion is taking to the stage in front of a live audience, seamlessly weaving song, movement and story into an experience they will want to share and cherish. Over the past twenty years she has performed to audience and critical acclaim locally in Brisbane, nationally throughout Australia and internationally in the UK and France.

Her self-penned one-woman musical Ella, Marilyn, Marlene and Me was an official sell-out two consecutive years at the Edinburgh Fringe Festival, garnering five star reviews from ThreeWeeks “absolutely brilliant… enthralling vocal talents wowed the audience” and four stars from The Scotsman “Melissa Western is on fire… it’s mainly about the eyes, the face and the voice.” In 2013, Melissa’s new original comedy-cabaret entitled Sweet, Sour and Saucy received critical and audience acclaim, Western being touted as a “force of nature” (Broadway Baby, 5 stars). The show went on to be nominated for three Matilda Awards in 2015: Best Musical/Cabaret, Best Female Actor in a Leading Role and Best Set Design as well as Western being named Favourite Leading Female Performance in the 2015 Del Arte Charts. Sweet, Sour & Saucy has toured Queensland, Western Australia and the UK.

She has recorded her own original CD Stepping Stone as well as releasing a live jazz CD, Live & Intimate and featuring on High Tide vol II (Brisbane Jazz Club), Tailspin: Brisbane Big Band tribute to Paul Gibens and Singin’ and Swingin’ with her Dad, Alan Western.

Melissa is a Churchill Fellow, was Valedictorian of her graduating Bachelor of Arts at UQ, holds a University Medal from the University of Queensland, first class Honours degree and was awarded her Masters of Philosophy in the field of Drama. In 2014 she was awarded a prestigious Churchill Fellowship to study improvised musical theatre in the UK. She has trained intensively in musical theatre at RADA (London) and NIDA, physical theatre with Zen Zen Zo, and has trained in dance for over fifteen years including: classes with Luis Pinto (Megajam), Jasmine Meakin (Hip-hop, Sexy Cool), Simone Pope (flamenco studio) and with teachers at the Broadway Dance Centre (New York).
From 2002-2009 Melissa was heavily involved with the Brisbane Jazz Club serving as the club’s youngest ever President. Under her stewardship the club thrived and now maintains its position as one of Australia’s premiere live jazz venues.

Melissa lives in Brisbane with her husband and performance partner Tnee and their two children Ella Abigail and Sasha Rose.